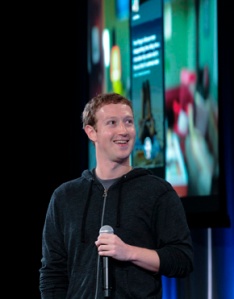 Before a rapt audience at Facebook headquarters Thursday, Facebook C.E.O. Mark Zuckerberg unveiled new software that he promised “will totally change the way you are wasting your life.”
Explaining the development of Facebook’s new phone software, Home, Mr. Zuckerberg said, “Our research showed that Facebook users still had a few hours a day when they were leading somewhat healthy and productive lives. Our new software will change all of that.”
Mr. Zuckerberg said his developers had worked for months developing Home, “which seizes control of your phone and makes it good for little other than Facebook—much like many Facebook users themselves.”
By bombarding the user with status updates on a twenty-four-hour basis, he boasted, “Home transforms Facebook from just a social network into something akin to a neurological disorder.”
As the audience applauded that pronouncement, Mr. Zuckerberg added, “At Facebook, we want to be a million voices inside your head.”
When one member of the audience worried whether Home would give Facebook even more access to private information about one’s life, Mr. Zuckerberg reassured the questioner, “After using Home for several weeks, you will have no life.”
While clearly proud of his latest product, Mr. Zuckerberg gave notice that he did not intend to rest on his laurels: “At Facebook, we will never stop striving to replace real experience with something soulless and empty.”-